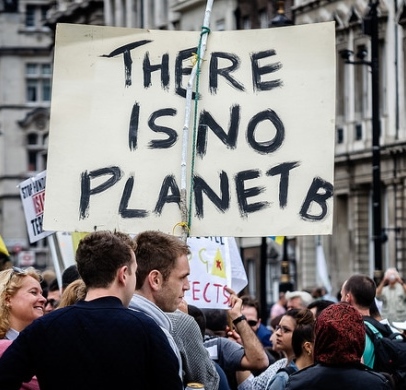 Will a future Labour government perpetuate myths about monstrous techno-fixes for climate change? Or advocate radical policies to deal with global warming that don’t heap the pain on the global south, and industrial strategies to hasten the transition away from a fossil-fuel-centred economy?

This question was raised – by implication, anyway – at the Campaign Against Climate Change conference in London on Saturday. The 200 people present heard essentially opposing answers from Barry Gardiner, Labour’s front-bench spokesman on climate change, and Asad Rehman, chief executive of War on Want.


The contrasting approaches were starkly evident when a question was asked from the floor about Bioenergy with Carbon Capture and Storage (BECCS) – an untried technology on which the world’s most powerful governments are relying heavily to claim they are on course to meet their climate targets.

Basically, BECCS would involve growing plants, burning them in power stations, and then capturing the carbon dioxide (CO2) emitted and storing it somewhere. (See also “Quick technological catch-up” below).

Despite the fact that BECCS has never been used anywhere yet, the latest (fifth) Intergovernmental Panel on Climate Change (IPCC) report has included huge amounts of it in its scenarios that plot how the world economy could move away from dangerous global warming. To make the numbers add up, the IPCC has also assumed huge amounts of afforestation (because trees remove CO2 from the atmosphere). These dodgy scenarios underpinned the decisions of the 2015 Paris climate summit.

Development campaigners say that BECCS could easily become a way of heaping more suffering on the global south – by taking land and water that could be better used for farming – to protect the global north’s carbon-heavy economic life style.

But when the issue was raised at Saturday’s conference, Labour’s Barry Gardiner insisted that the 2015 Paris climate summit – that adopted plans for tackling global warming that rely heavily on BECCS and other untested “negative emissions” technologies – had shown the way forward.

He underlined the role of “negative emissions”, and particularly afforestation (an issue on which he has worked for many years) – and highlighted the danger of continuing deforestation in Brazil.

Gardiner also argued that the Paris summit, by abandoning the idea of legally-binding emissions reduction targets, and instead collecting (inadequate) voluntary targets from nations, was an important step forward. He claimed that at Paris the world’s governments had moved from a “top down” to a “bottom up” approach.

Asad Rehman of War on Want said that the Paris summit had reflected the unequal and exploitative relationship between rich countries and the global south.

“The global north didn’t want to do its fair share to reduce emissions”, he said. “This is the reality of weak, ineffectual economic architecture.” And it was “not about Trump [who was elected in 2016, after Paris] – it was about Obama”. (I agree that Paris solved nothing, and wrote about it in the run-up to the talks.)

Professor Joanna Haigh, co-director of the Grantham Institute for Climate Change and the Environment, who was also on the panel, acknowledged that “negative emissions” technologies such as BECCS are used in all the IPCC’s scenarios that lead to zero carbon. She said she was “very worried” about the complex resources issues raised by BECCS.

Of all the discussions at the well-attended, well-organised conference, this was in my view the most revealing.

It made me wonder: if Labour is elected, is it going to support the rich-world fiction that the economy can trundle along, and massage the greenhouse gas emissions figures with “market mechanisms”? Is it going to join other rich country governments and focus on trying to protect themselves from the volatile weather, rising sea levels and other effects of climate change? Or is it going to tell the truth about the failure of the international climate talks to find a solution, and urge more radical strategies?

If Barry Gardiner’s approach – that the Paris agreement “really does change everything” and “negative emissions” technologies can help – prevails, the UK under Labour will remain in the ranks of the rich countries that keep pushing the global warming problem on to the backs of people in the global south.

If by contrast a future Labour government is to take seriously Jeremy Corbyn’s assertion that climate change is “the single most important issue facing humanity”, it would need strong action outside parliament, to push it further.

I am not expecting or asking that a future Labour government “solves” the climate crisis. That would be stupid. But there’s nothing to stop Labour politicians telling the truth to their supporters, and to people all over the world who stand to suffer due to global warming. Would a Labour government adopt an uncritical attitude to the international climate agreements, their neoliberal underpinning, and the “negative emissions” fiction at their centre?


Throwing out these illusions might give some teeth to some of the more radical proposals for moving away from fossil fuels under discussion in the party.

Discussions about curtailing billions of pounds worth of subsidies to fossil fuel industries, or nationalising the “big six” in electricity generation and starting the move towards a decentralised, renewables-centred system will not get far if they are mired in the context of a Paris-talks-type “green new deal”.

Let’s hope there are more scientists at future labour movement events on climate policy. Some of them would soon put Barry Gardiner straight about the Paris summit and its reliance on “negative emissions”. Warnings have been sounded, for example, by:

■ Philip Williamson of the University of East Anglia, science coordinator at the Natural Environment Research Council, who warns in an article in Nature that the IPCC’s five-thousand-page fifth assessment report relies heavily on BECCS in its climate policy scenarios, but says not a word about “the environmental impacts of large-scale CO2 removal”.

Planting the necessary number of trees could involve “more release than uptake of greenhouse gases, at least initially”, due to land clearance, fertiliser use and so on. It could take up a land area about half the size of the USA. Such a huge land-use change would “vastly accelerate the loss of primary forest and natural grassland”.

Williamson concludes: “For now, action should focus on urgent emissions reductions and not on an unproven ‘emit now, remove later’ strategy.”

■ The head of Oxford University’s geoengineering programme, and a couple of other high-flying colleagues, who – despite supporting the idea of “negative emissions” in principle – derided the Paris summit’s reliance on BECCS in its scenarios. It is “hazardous to rely on science fiction in the development of scenarios used to inform policymakers”, they argued. Scenarios that “employ entirely speculative approaches”, such as large-scale BECCS, seem “reckless in the extreme”.

They added: “For a technology to be deployable it needs not only to work, but also to possess a social licence to operate.” The use of land for BECCS would “restrict agriculture” and drive up food prices. “Politically, the issue seems so toxic that the Paris Agreement carefully avoided mentioning negative emissions at all.”

■ A team at the Potsdam Institute for Climate Impact Research that tested the IPCC’s scenarios and concluded that planting trees or grasses “on a grand scale” for BECCS “would push the planet beyond ecological limits in other dimensions”, and specifically, stresses on “biodiversity, biogeochemical flows, water resources and land use”.

Dieter Garten, one of the researchers, said: “Our work substantiates that it would be highly risky to play only this card as a strategy for achieving the climate targets”. Vera Heck, who led the research, warned that if all-round “ecological guidelines”, including those for land and water use, are taken into account, “the potential for biomass and CCS is very small”.

How many different ways do they have to say it before some politicians get the message?

Bioenergy with carbon capture and storage (BECCS) works like this: crops grown for the purpose are burned in power stations to provide energy, and the carbon dioxide produced is captured for secure long-term storage.

CCS has yet to be operated at scale anywhere. Power companies regard it as “uneconomic” and say they will fit it when the numbers add up. Meanwhile they are building hundreds of coal-fired stations without the CCS fig-leaf.

According to the Global CCS Institute, an industry association, at the end of 2017 there were 17 CCS facilities in existence. The Institute described these as “large scale”, but the power stations at which they are deployed are smaller than average.

The Institute says that CCS is removing 37 million tonnes of CO2 from the atmosphere each year, i.e. about one-thousandth of the quantity emitted by fossil fuel use.

If CCS was ever to be operated at large scale, one of the big technological headaches would be finding places to store the CO2. (Trade Unions for Energy Democracy made a strong case for rethinking union support for CCS. Highly recommended.)

On top of these problems that apply to all CCS, the big additional problem for BECCS is the vast quantities of land and water that would have to be used.

If you haven’t heard of BECCS until now, don’t worry, it’s not you. Not long ago, no-one had heard of it. Carbon Brief have published a fascinating history of the concept, showing that it went from being floated as an untested hypothesis in 2001 to being included in climate scientists’ scenarios for the future a few years later.

From 2005 onwards, climate policy forecasters started to include it in scenarios, “often to the point that they grew reliant on it”, Leo Hickman of Carbon Brief writes. “In little more than a decade, BECCS had gone from being a highly theoretical proposal for Sweden’s paper mills to earn carbon credits, to being a key negative emissions technology underpinning the modelling, promoted by the IPCC, showing how the world could avoid dangerous climate change this century.”

Michael Obersteiner, who wrote the first scientific paper on BECCS, told Carbon Brief that some people have misinterpreted his work. The concept was “unfortunately misused for regular [emissions pathway] scenarios and not in a risk management sense”. His argument had been to use BECCS “as a backstop technology in case we got bad news from the climate system”, not as a substitute for a strategy “to plan climate mitigation”.

■ Philip Williamson’s article in Nature is a good primer for non-scientists on some of the controversies around BECCS. A primer from Biofuelwatch is useful too.

About the cartoon. It appeared on the front cover of a pamphlet, Global Warming in an Unequal World, published in 1991 by the Centre for Science and Environment in New Delhi, India. The pamphlet was an angry response to US-based environmentalist NGOs who, in the run-up to the first international climate conference at Rio de Janiero, had exaggerated deforestation as a cause of global warming. A quarter of a century later, the political divide persists. Northern governments, and some northern NGOs, try to deflect the conversation away from reducing fossil fuel use and towards afforestation. Those who seek solutions that embrace both opposition to global warming and social justice fight back. GL, 12 March 2018.