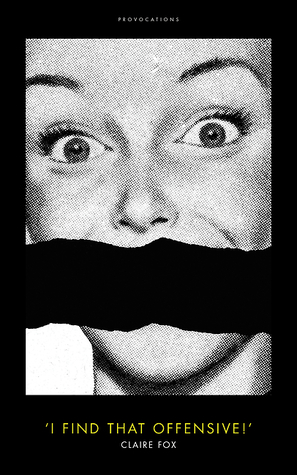 I Find That Offensive

I Find that Offensive is one in a series of books from Biteback Publishing which come under the umbrella name of 'Provocations.' In this series, we've read the likes of Kevin Meagher argue that a United Ireland is inevitable, John Sutherland discussing the wars on young and old people, and even prime time scumbag Kelvin McKenzie articulating his enthusiasm on immigration.

And with them all being around the 200 page mark, there is enough in there to facilitate an argument while also being light enough to dip in and out of when needed.

With the recent conviction of YouTuber (and attention seeker) "Count Dankula" for making a video of a pug making a Nazi salute while he uses the phrase "gas the Jews," and the PSNI investigating Ellie Evans for holding a placard saying "Fuck the DUP", revisiting this book is a grim reminder of what we now face.

A former member of the Revolutionary Communist Party, Claire Fox has been a known figure in the media for quite a while with columns in the Times, being a panellist on Radio 4's The Moral Maze and appearing on Newsnight. Very much a fervent supporter of freedom of speech and the necessity for debate, this book should be a starting point for today's people.

Unfortunately, it doesn't quite hit the revolutionary zeal. But it gives it a good go.

She begins by discussing a talk she gave in a classroom made up of "90 per cent Muslim students" post Charlie Hebdo, in which she managed to offend students by not referring to Mohammed as the Prophet. She notes that "One young woman, her voice quivering explained that...seeing something like the Hebdo cartoons were...like being physically assaulted..." Quite a strong statement, I'm sure you'll agree.

Linking it with another school discussion she had centred around Ched Evans (then convicted of rape but subsequently found not guilty on retrial), Fox describes how her defence of due process, rehabilitation and (quoting Germaine Greer) informing these pupils that rape was not necessarily the worst thing that could happen to someone was the cue for inevitable outrage: "Girls were hugging each other for comfort...I was told that I was dangerous, irresponsible and offensive."

Of course, we know that teenagers are prone to melodrama and exaggeration. But Fox felt this was different: both sets of kids genuinely believed that such views are unacceptable and didn't want to hear them. This wasn't someone opting out of an argument, this was two groups of school kids demanding that the conversation be shut down.

It's both childish and disturbing, and it's filtered into everyday life. Fox reports it with an air of resignation and genuine bewilderment, even while trying to be sympathetic. This is the main problem of the book: trying to express an understanding tone when the words on the page don't match this.

Split into three parts, the first one sets the scene by looking into various examples in recent UK-US history of "offensiveness." Ranging from the stupid (clapping being banned because it could "retraumatise" people) to the insidious (the reaction to Erika Christaki's email about Halloween costumes), it's an infuriating read and the ever-growing list of absurdities makes it reminiscent of Monty Python recreating Kafka.

Interestingly, and this has been mentioned by other reviewers, when discussing the shameful episode where supposed "feminists" lashed out at Pretenders front woman Chrissie Hynde for her comments suggesting that the rape she suffered was partly her own fault, Fox uses the word "culpability" in relation to Hynde's actions.

Now, since Hynde is on record as saying she feels a certain amount of responsibility, the use of the word is legitimate in this context. However, earlier in the book, Fox castigates the people who felt the Charlie Hebdo staff were, in effect "asking for it." While that is understandable, there is a problem here. Surely, by publishing cartoons that some would consider blasphemous, there was always a chance that people who hold fanatical views about a religion would get wound up enough to attack the magazine? Does that make it right? Not at all. But it is a risk.

And this is where the concept of free speech can become tricky. I am of the opinion that people are perfectly entitled to say what they want. However, that does not mean there are no consequences. Someone might lash at you verbally or physically. Are they right to physically attack you for something you've said? No, because that is a form of shutting down debate. However, it is a fact of life that it can happen and is one of the risks you take when voicing opinions.

Of course, I'm aware that the format of the book will give rise to limitations in areas that could be discussed more thoroughly in a larger tome. However, it would have been less disingenuous of her to at least acknowledge that there are wider issues also up for debate, but that they remain outside the scope of I Find that Offensive.

Part two is a look at why teenagers and young adults hold such views. Somewhat predictably, Fox lays the blame at everyone from parents not letting their kids get scraped knees while playing, governmental health and safety issues (the fight against obesity, endless anti-bullying campaigns), schools for removing texts that could be considered "problematic" and universities for being so money driven, that students now call the shots by being customers of the university. And what business wants to lose customers? So they indulge students.

While there is undoubtedly an element of truth in all of this, it comes across as a bit "it were all green fields around here when I were a lass." Children have been mollycoddled by parents since the dawn of time, and anti bullying initiatives can actually be a good thing. Of course, the overabundance of policies (including "deliberately excluding others") may render the initiatives impotent (which is probably the point Fox is making) but maybe an extra run through Microsoft Word would have smoothed out the exasperation which can irritate.

Ending with two letters (one addressed to the "snowflakes" and the other to free speech advocates) is a succinct way of summing up her views. Unfortunately, the first letter is riddled with smugness and arrogance and is highly unlikely to win over anyone. However, the second one is genuinely motivating for free speech enthusiasts. Imploring them not to resort to shock tactics, she emphasises the need for conversation and allowing others to use their voice.

Overall, for a 200 odd page book, there's enough in here to pique the curiosity of someone who feels frustrated and worried by recent developments but is hamstrung by its hectoring tone, questionable attitude towards certain events and general "PC gone mad" rant of modern culture. But through it all is a clear desire to protect and defend the right of the individual to speak their mind, and that is rare in this day and age.

Footnote: I asked the people behind the #FuckTheDUP page if they wanted to comment on the case of "Count Dankula" and what that meant for freedom of speech. They did not respond to my query.