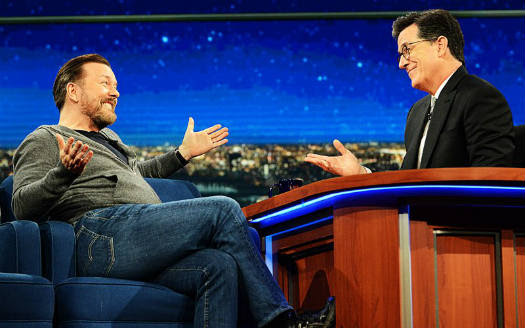 Some Thoughts On The Recent Conversation Between Gervais And Colbert

Recently, the British comedian/actor Ricky Gervais appeared as a guest on The Late Show with Stephen Colbert. In their short exchange, Colbert, a Catholic, presses Gervais, an atheist, on several issues pertaining to science, atheism and faith.

In the ensuing commentary, there have been several criticisms launched at Gervais, foremost among them the idea that Gervais’ remarks reflect a type of naivety that is becoming increasingly common among atheists and the like. I’d like to examine this charge and its salience by way of going through four of the debate points that came up between Gervais and Colbert.

Colbert begins with that doozy of question, “How can something come from nothing?”. This, understandably, leaves Gervais taken aback (at least initially). For, how indeed can one reasonably argue that something came from nothing!? The problem with this question from Colbert however is that it is a straw man argument, that has been recognized as such and pointed out ad nauseam. The atheist is not beholden in any way to the claim that something came from nothing. Even if I were to grant that the current consensus among scientists is that the universe literally, as apologists are wont to put, ‘popped into being out of nothing,’ (even though this is not the current consensus), this would not be to say that the atheist is thereby saddled with this silly “something came from nothing” claim. Let me say it for the umpteenth time; theism is not scientism, logical positivism, or, for that matter, naturalism, no matter how many times believers suggest otherwise and no matter how many atheists happen to subscribe to these views.

Many atheists, myself included, hold that the existence of nothing is metaphysically possible. That is, there is necessarily a metaphysical first state of something that must always exist at all times. This means that before the big bang, something else existed. Do I know what that something was? Of course not. Does my lack of knowing what this something is prove that a god exists, or that that something was point in fact, the God of Christianity? Of course not. Therefore, when asked the question, “Why is there something, rather than nothing?” I always respond with, “Why should there be nothing as opposed to something?” Maybe, for all we know, it’s just metaphysically necessary for there to be something and this necessity explains why there is something rather than nothing even though nothing would seem a priori simpler on atheism. That this is so or may be the case is in no way a problem for atheists any more than it’s a problem for theists. We all have to terminate the chain of regress somewhere, after all, and it’s just not clear why anyone should prefer terminating this chain of regress with God, as opposed to some initial/fundamental state of the cosmos.

2/ Outside Science and Nature

Gervais claims that atheism is not a belief system. Technically, in so far that by “atheism” we’re talking solely about the belief that God does not exist, I think that this is correct. But in terms of Gervais’ using this point against Colbert so as to say that the burden of proof (in the debate about God’s existence) lies squarely on Colbert’s shoulders, this move is sneaky at best, and dishonest at worse. The problem is that whether or not atheism, strictly defined, is a worldview, Gervais already revealed that he’s a naturalist, and metaphysical naturalism (the view that all that exists is the natural realm) most certainly is a world view. So, in other words, when Gervais and other atheists like him try to claim that they have no burden of proof to meet, and yet simultaneously hold that metaphysical naturalism is true, they’re trying to have their cake and eat it too. Naturalism is a worldview and thus, insofar as someone claims that it’s true, then they have a burden of proof that they must meet.

Gervais describes himself as an agnostic atheist, which, as anyone fluent in the contemporary debate between atheists and theists knows, is common parlance among nonbelievers. Roughly, the idea here is that when one uses the term “atheist” they’re making reference to their belief, whereas when one uses the term “agnostic,” they’re making reference to their knowledge. In this way, so the argument goes, one can be an atheist in the sense that they don’t believe that God exists (or that they positively believe that God does not exist) but nevertheless be an agnostic in the sense that they don’t know, or claim to know, that God does not exist.

Now, descriptively speaking, this taxonomy seems to correspond pretty closely to the way that many atheists now days construe their atheism. So, as far as semantics go, this seems correct. However, and I say this as an atheist, in terms of its philosophical rigor, this construal of atheism seems a bit lacking. To demonstrate this, try to imagine an atheist using the distinction between atheism and agnosticism, as well as the distinction between soft and hard atheism, with respect to any other conception of god apart from the standard, Western monotheistic conception. That would be peculiar, would it not? So, the question is why don’t we atheists bother to qualify our rejection of Zeus or Odin with the caveats of agnosticism and a mere lack of belief? And if we don’t need to do this, why, then, must we do this with respect to the god of Christianity?

Well, frankly, I don’t think we need to. The mere fact that I don’t know *for certain* that Zeus doesn’t exist does not mean that I have to be an agnostic with respect to his existence, any more than the fact that I can’t know for certain that I’m not just a brain in a vat means I have to be agnostic about whether or not I’m just a brain in a vat. In other words, the sort of certainty that agnostic atheists point to in order to distinguish between their atheism and their agnosticism is itself based on a rather sophomoric understanding of epistemology that is quickly done away with by the slightest of philosophical inquiry. I may not know for certain that God does not exist, but this is not at all to say that I’m not entirely rational in going ahead and affirming my belief in the nonexistence of God all the same. And I don’t have to call myself an agnostic while doing so.

4/ I believe in one less god than you

You have to admit; this is good rhetoric. It’s simple, easy to understand and recite and at least seems to portray a profound point about belief in God. Yet, when unloaded, this objection to theism amounts to little more than rhetorical flourish.

The problem, as I see it, is twofold: one, strictly speaking, there is no logical inconsistency in denying the existence of all of the 2,999 other gods whilst simultaneously affirming the 3,000th one. Granted, I do think that the theist should consider the odds of them just so happening to find themselves in the particular denomination of the particular religion that got their particular concept of god right, but the mere fact that they, like us, deny the rest, whilst believing in theirs, doesn’t in any way demonstrate that they aren’t nevertheless correct.

And two, there are clear distinctions between say, the gods of Greece, and the god(s) of Judaism, Christianity and Islam. These differences are not merely definitional, but conceptual. In particular, the gods of old were considered to be in, and constituents of, the world that we humans inhabited; they were parts of the universe, if you will. In contrast, the Gods that arose from about the 8th to 3rd centuries B.C.E. were not only thought of as existing separate and apart from the world, but seen as the very foundation and grounding of being and existence itself. In this way, the God of Christianity is categorically different from the gods of Greece, irrespective of the fact that we use the word “god” to describe them both.

That said, if nothing else, what this point does do, at least potentially, is de-radicalize the atheist in the eyes of the average believer (“We’re not so different after all you see!”). In a country where people often see the atheist as the big bad wolf, this may me precisely the sort of thing we need. Also, in Gervais’ defense, while there is certainly a time for serious, philosophically nuanced argument, there is also a time for quick, easy-to-understand, rhetorical points. It should go without saying that an interview on The Late Show with Stephen Colbert is an example of the latter. Hence, I think we can all forgive Gervais on this particular occasion for not wading too deep into dense, philosophical waters.
Atheist Republic