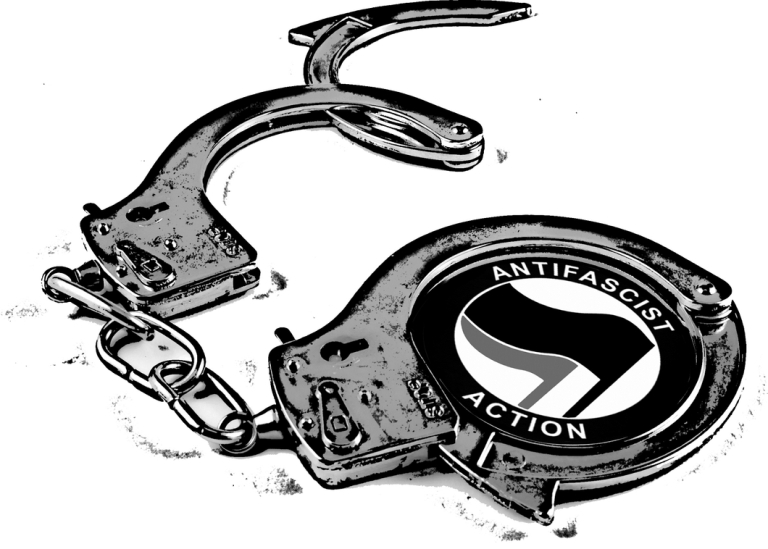 All are welcome to a solidarity demonstration with Russian anti-fascists, on Saturday 19 January, at 2.0 pm at the Cable Street mural (236 Cable Street, London E1 0BL).

The action is supported by London Anti Fascists, the Anarchist Communist Group, Feminist Fightback and Plan C London. Other organisations are welcome to add their support.

The demonstration is drawing attention to the “Network Case”, in which the Russian security services have detained and tortured anti-fascist activists.


On 29 November, two of the detainees, Dmitry Pchelintsev and Andrei Chernov, went on hunger strike, claiming that during the review of their criminal case file they were intimidated by prison officers and staff of the FSB (federal security services). Full report here.

The Parents Network, a support group set up by the parents of the defendants, said in a statement: “If our children have violated the law, they will answer to society to the full extent of the law. In the present circumstances, however, they are unable to answer to society. They answer to people who believe that physical violence, beatings, and electric shock torture can be legally used to make other people’s lives conform to the canons and stories that will get them new assignments and promotions.”

The repression began in autumn 2017 when six anti-fascists were arrested in Penza and had weapons and explosives planted on them. The Russian Federal Security Service (FSB) tortured the anti-fascists in the pre-trial detention facility by electrocuting them, beating them and hanging them upside down. While torturing them, security chiefs forced the activists to memorise the testimony the FSB wanted them to give: that they were part of a fictional terrorist group called ‘The Network’.

Two more anti-fascists were arrested in St. Petersburg at the end of January 2018 and were also beaten, electrocuted and forced to incriminate themselves by saying they were members of ‘The Network’. A third person was accused in St. Petersburg and two more from Penza have also been arrested for supposed involvement in this make-believe organisation. The FSB claims that the detainees planned to arrange explosions during the presidential elections and the World Cup to “further destabilise the political situation in the country”.

After knowledge of the fabricated court cases and horrific torture became widespread, solidarity actions started to take place, but this led to more repression. Some Russian activists who took part were detained, electrocuted and had criminal proceedings started against them – just for expressing solidarity.

This repression of anti-fascists comes at a time when the Russian state are working with gangs of far-right thugs to repress the whole of civil society. One poignant example of this happened ten years ago, two Russian anti-fascists, journalist Anastasia Baburova and lawyer Stanislav Markelov, were murdered by fascists in broad daylight on 19 January. Every year, Russian anarchists and anti-fascists gather to remember them.

On Saturday 19 January 2019 we are calling for everybody opposed to racism, xenophobia, fascism and the upsurge of far-right populism sweeping the world to join us on the streets to express our solidarity with Russian anti-fascists. The demonstration will start at the Cable Street mural near Shadwell station, east London and will feature speakers and a rally.

Please email london19jan(at)riseup.net to add your organisation to the list of supporters.

■ For more information on the ‘Network’ case, see: