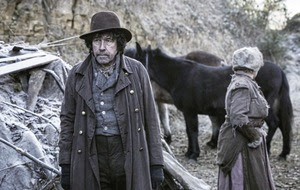 Black 47 - A Robust Take On Irish Famine In The form Of A good, Bloody Yarn

It could be a line from Richard Crenna’s Colonel Trautman in First Blood, explaining to a rookie why “the best soldier I ever knew” – in that case one John Rambo – went rogue.

Somewhat incongruously still best known for Priscilla Queen Of The Desert, Australian-English actor Weaving’s craggy features and considerable talent make for a formidable screen presence in Black 47, a historical drama-cum-revenge thriller set against the backdrop of the Great Famine that has been likened elsewhere to an Irish spaghetti western.

Directed by Dubliner Lance Daly and co-written by PJ Dillon and Pierce Ryan, on whose Irish-language film An Ranger it is based, Black 47 tells the story of Feeney, who returns home from fighting with the Connaught Rangers in Afghanistan (plus ca change…), to find his native Connemara in the throes of the great hunger, town and countryside alike ravaged.

His mother has starved to death, having been evicted and refused to ‘take the soup’ of evangelical Protestants, a condition of receiving such charity being to renounce the Catholic faith; his brother has been hanged for stabbing a bailiff during said eviction, from their hovel on the estate of ‘Lord Kilmichael’ (Jim Broadbent).

Further tragedy is to befall his widowed sister-in-law (Sarah Greene) and her children when they too are made to suffer the appalling injustice of being ejected from their home and having it systematically destroyed.

So Feeney does what any trained killer would do in the circumstances: he goes on the warpath, the cold fire of righteousness blazing in his belly: “If I don’t get justice for them, who will?” he asks Hannah, who is sent to track him down.

I say revenge thriller – and there’s plenty of action, to be sure (to be sure) – but this is really a famine film in disguise: historical detail, much of is shocking to be reminded of, is woven into the narrative of what is a good, bloody yarn – by and large with subtlety and success.

Audiences unfamiliar with the story of the famine – and it’s surely only a matter of time before this, the first feature film to tackle it, gets a platform on the likes of Netflix – are given sneaked-in lessons on everything from the wildly iniquitous social and economic structures of the time, to the Young Irelanders, the Ribbonmen, the outrageous suppression of the Irish language and the catastrophe of the potato crop failure itself.

The plot is pure fiction and certain characters and incidents are painted with broad brush strokes but the overall effect is that the story of Ireland’s single greatest calamity, which could easily and understandably make for a downbeat movie, is told in a way that stirs the viewer to anger too, as well it should.

Along with that of Weaving, the performances of Moe Dunford and Stephen Rea add heft to proceedings, while Melburnian Frechville is first class in the lead role (quite a bit of his dialogue is in Irish; he even sings impressively in the mother tongue).

It’s a robust, not a maudlin take on the famine, though there is, quite literally, some diddley-dee, in the form of song about an unfortunate chap from near Downpatrick, wryly sung by the ever understated yet ever convincing Stephen Rea.

Who, it turns out, rides a mean donkey. Who’d have thought?


Film Review Long Kesh Inside Out