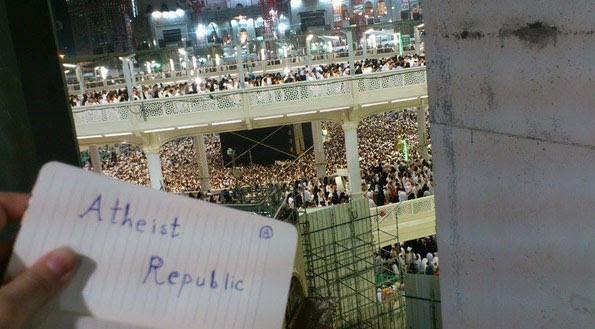 
The picture above was sent to us from a very brave atheist girl in Saudi Arabia. The photo was taken in front of Kaaba at the Great Mosque the most sacred mosque in Islam, in Mecca. It would not be overstating the situation to say that she risked her life to take this photo.

Fundamentalist extremism is the official and only accepted position in Saudi Arabia which is a fundamentalist Islamic dictatorship. The country was created in the 1930s by jihad and has been run by the same “royal family” since then. The first leader was Abdulaziz al-Saud and he gained power by cozying up to a conservative group of Islamist fundamentalists called the Wahhabis. The relationship and subsequent conflicts with the Wahhabis, along with Saudi Arabia’s oil wealth continues to shape and define this small (about the size of Texas), but globally influential country.

This picture is a reminder of something that is important to remember: while the Wahhabists are indeed a powerful force in Saudi Arabia, they do not represent everyone. There are many people in this country seeking an open-minded, rational life of freedom.

When we shared this image on Facebook, we of course received many of the usual “damn your soul” comments as well as calling this girl a “whore” and a “bitch” and cursing her and her family. Some people thought it was fine that she’s an atheist but “disrespectful” to take and share this image. However, most of the reactions were of admiration and respect and she received several shout-outs from fellow atheists in other oppressive regimes.

David Smith: From little acorns grow giant oaks. This picture has heartened me today. Thank you who ever you are.

Mostafa Elsayed: Hugs from Alexandria Egypt. [by Ex Muslim who is monitored]

Austa Hansen: Pictures like this really speak to me! Everyone says that religion is not oppressive, and that it is a personal choice, especially when they defend Islam's practices, and yet they neglect to mention the fact that the people posting these pictures are at risk of being put to death if they're caught! If that's not an oppressive religion, I don't know what is!
Atheist Republic Saudi Arabia