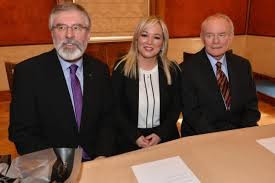 By AM Monday, April 3, 2017
Share Tweet Share Share Email
A piece from Tommy McKearney written shortly after the appointment of Michelle O'Neill as leader of Sinn Fein in the North. This article first appeared in Socialist Voice, February 2017. Tommy McKearney is a socialist republican and organiser with the Independent Workers Union.

Sinn Féin’s newly appointed leader in the North, Michelle O’Neill, faces a daunting task as she begins to guide her party during a period of uncertainty in the six counties


Notwithstanding the fact that she is a politician of considerable experience and ability as outgoing minister for health in the Stormont Assembly, she faces several difficult challenges. Not only has she a short preparatory period before leading the party into an election in early March but she will be faced immediately thereafter with what are bound to be fraught negotiations with the DUP over the establishment of an Executive—and that may prove to be the easy bit.

The fundamental problem facing all political parties in Northern Ireland is not restoring the institutions but what to do with a failed political entity, locked helplessly within the United Kingdom.

Although there may be some small degree of electoral slippage for both major parties, Sinn Féin and the DUP are likely to remain the two largest groups in the Assembly. Thanks to the limited ability of the Stormont opposition, not to mention the absence of a visible alternative beyond that institution, the previous coalition partners will emerge as the only contenders for executive office.

Whatever the electoral tally may show, there is undoubtedly a wide gap to be bridged if an Executive is to be formed in the weeks following 2 March. Sinn Féin has been stung by criticism from its own supporters for its inept and often contradictory early-days handling of the “cash for ash” scandal. The party was reluctant to bring down the Assembly and felt angry when forced to do so and thus trigger an election. Michelle O’Neill will be obliged, therefore, to wring some noticeable concessions from the DUP before re-entering coalition.

Arlene Foster, on the other hand, has practically staked her reputation on acting tough with Sinn Féin while simultaneously rejecting any responsibility whatsoever for the RHI fiasco. This indicates the likelihood of stalemate, followed by direct rule, for some months at least.

There was a time in the not too distant past when both London and Dublin would have reacted with some alarm to the prospect of relations between Northern Ireland’s political parties breaking down. Not any longer, though. Put bluntly, there is virtually no prospect of this rupture in the Assembly leading to widespread armed activity, and at any rate the Irish and British governments are now wrestling with what both consider the much more important issue of Brexit. Consequently, the quarrelsome Northern politicians will be left on the back burner until Theresa May finds time to send someone in to force through a settlement.

No doubt an arrangement of sorts will be reached sooner or later. Both parties are acutely aware of what may happen when local political institutions are put in cold storage. Without the structures presented by the existence of a devolved administration and the public platform this provides, electoral parties tend to stagnate and even wither. Sinn Féin and the DUP are well aware of what happened to the Ulster Unionist Party and the SDLP as a result of the prolonged period of direct rule during the 1980s.

Both parties, however, are caught in a bind. Stormont as now constituted allows them to exert a certain amount of influence but grants no real power. The recent ruling by Britain’s Supreme Court in relation to article 50 of the Treaty on European Union—i.e. Brexit—made this painfully clear when it “unanimously ruled that devolved administrations did not need to be consulted and did not have a right to veto Article 50 . . .” It might well have added that, deprived, as it is, of fiscal and political authority, this applies to all other matters of significance coming before the Assembly.

Making matters worse is the fact that those who have administered the six counties over the past ten years have no concrete plan for improving the situation. On the contrary, they have found themselves in the unenviable position of having to manage their responsibilities within parameters dictated by governments in London.

How impoverished their response to this has been is evidenced by feeble initiatives such as the proposed reduction in corporation tax and appeals by the first and deputy first ministers to foreign transnationals to come and exploit the North’s low-wage economy.

Moreover, it now appears that the absence of meaningful control over the economy may have played a significant part in the RHI (or “cash for ash”) scandal. Approximately 45 per cent of this grant was allocated to the poultry industry.¹ An impartial observer could be forgiven for thinking that this was, in effect, a disguised subsidy for a low-tech industry that, unsupported, might easily have been undermined by competition from abroad.

Interestingly, the scheme’s attraction for poultry farmers was reported by the News Letter as far back as August 2014,² a fact that may require answers from the then minister for agriculture, Michelle O’Neill.

Whatever conclusion will eventually be drawn from inquiries into this affair, it exposes inherent weaknesses in Stormont’s political and economic structures. The northern political entity is a peripheral region of the United Kingdom, locked in to London’s political and economic orbit. Unable to chart its own course, Northern Ireland is reduced to operating an opportunist economic policy, regulated and contaminated through the mean practising of sectarian politics.

Therefore, while the Assembly and the Executive may eventually be restored, they will continue to huff and puff and do little to improve the dismal lot of the region’s working class.

As with so many other states failed by a colonial past and contemporary capitalism, the North needs a transformative strategy. This requires frankness, honesty, and a willingness to contemplate options that will not please everyone. The northern state, as now constituted, is a failure and has to be replaced. That such a change will come about is no longer in doubt. The fall-out from Brexit, Scottish disenchantment with London and changing demographics are among the factors that guarantee this.

Simply waiting for events to take their course, however, is not an option in the volatile political arena that is Northern Ireland. The only responsible approach is to make sure that change happens under the best possible conditions and with maximum support from within the working class. To do so it will be necessary to introduce a programme that demonstrates (even if it cannot be immediately implemented) a clear and reasonable path towards a new and better society. Core issues detrimentally affecting working-class communities have to be given priority and solutions identified over the short, medium and long term.

It doesn’t take long to list problem areas that would form the basis of a transformative programme. Just as in the Republic, there is a homeless and rental-housing crisis in the North that can only be addressed by a comprehensive public housing strategy. The creeping privatisation of the National Health Service has to be halted and rolled back. Workers’ rights need defining, asserting, and defending. Adequate care for the aged must be made a priority. And the greatest stain of all—ubiquitous food banks in 21st-century Northern Ireland³—must be addressed and the need for them ended for all time.

To implement such a strategy it will be necessary to build a movement around progressive forces and identify a methodology for engaging with the situation. Let’s be honest: this won’t be easy, but the alternative is to do nothing while tolerating existing failure, as we wait for the situation to inevitably get worse.

As socialists, however, we believe we can succeed in this endeavour, because we always exercise “optimism of the will,” even in the North of Ireland.