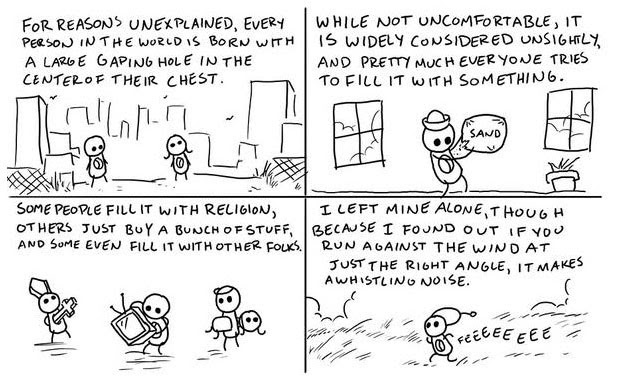 Where Is Your God-Shaped Hole?

Have you ever heard this phrase? "Everyone has a God-shaped hole in their heart." This notion is pervasive in various forms in many Christian communities.

The general belief is that because humans were created by God, they want to know and serve God, even if they don't realize that's what they want. This belief is often used to explain everything from drug abuse to food addiction to depression. Humans long to know God and if they aren't fully serving and loving God, they attempt to "fill the God-shaped hole" with other things or other people.

We know that this isn't true. But if humans don't actually have a "God-shaped hole," where did god come from? How did religions form and why do they continue?

We asked some of our members for their thoughts, and to see what they have learned on the subject. Here, Saahil offers some of his insights.

How did religions come into being, and how did they survive? The answers to these questions are being answered by evolutionary biologists, and unlike those offered by the holy books, these make a lot of sense.

Scientists agree on a few key physiological and behavioral requirements for the evolution of religious belief. The most obvious requirement is a brain with a neocortex developed enough to give rise to complex religious and philosophical ideas. The ability to reason, and to associate cause and effect would have been essential in the evolution of supernatural belief. Language, or a method of symbolic communication, is also widely accepted to be an essential factor in the advancement of religion. It is quite possible though, that early human societies, dating back to our ancestral hunter-gatherers, possessed complex religions that have vanished without a trace.

Most evolutionary biologists, though, aren't content with just the evolutionary requirements. To explain the existence of a trait or behavior, one must explain how it survived from the time of its inception. This is where the water gets a little murky. On the one hand, many scientists assert that religious beliefs exist as a by-product of an advanced brain capable of imagining and rationalizing, which are considered higher order brain functions with many selective advantages.

On the other hand, many others think that religions offered, and perhaps even continue to offer, a selective advantage. I am personally inclined towards the latter. The selective advantage of religion would reside in its ability to alter the behavior of individuals in a group. Early humans lived in large groups, and as with all social animals, altruism is beneficial, if not essential, for the survival of large groups. Religion may have served to shape and reinforce the morals of a tribe, increasing the cohesiveness of such groups and conferring such tribes an advantage over those that were less cohesive. As early human tribes grew, so their morality evolved into religions, which used the fear of ever-watchful ancestors or gods to inhibit selfishness and increase cooperation.

It is quite possible and indeed likely, that religions which emerged later evolved to include elements of racism and violence to make the tribe more aggressive, helping them to conquer foreigners - a classical selective advantage. The question of the evolution of monotheism, however, is open to debate. Since even today a large number of polytheistic and pagan religions exist, it may be argued that monotheism may have flourished simply because the major monotheistic religions happened to grow out of each other.

Why do you think belief in god(s) or some sort of religion is so common? Do you have a different theory or understanding of the evolution of god(s)? We'd like to hear it.