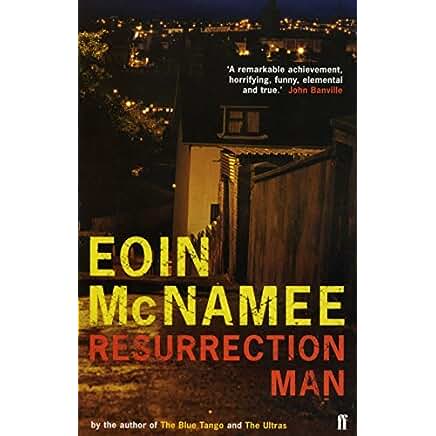 A little tradition of mine is to dig out this book at the start of October.

Why? Because the autumnal elements that are all too evident suit the mood of this book perfectly. Decay, despair, dread, disgust.

Streets that are all too familiar take on multiple faces during autumn. They become places hiding secrets. Maybe two people shagging in dimly lit stairwell. Maybe a homeless person can be found wandering in areas were sodium-vapor lights offer some kind of antiseptic glow that makes their surroundings more desolate than they are.

Resurrection Man is a book for this time.

First published in 1994 (I believe around August/September), Resurrection Man quickly revealed itself to critics and audiences as a book of immeasurable atmosphere, violence and sinister underlining's that are ambiguous in just how far the connections go.

Notorious for being loosely based on the Shankill Butchers, McNamee takes Martin Dillon's tale as a starting point, filling the book with vast imagery of ghosts, murder, secrets and knowledge. Although the basic plot follows a similar line with Dillon (bullied for having a Catholic name, romper rooms, killing witnesses in jail, setting up a gang etc), there is so much more going on than a simple retread with different names.


In McNamee's hands, the city of Belfast becomes a character in itself. This isn't just a city at war. It's a gothic, Cormac McCarthyesque metropolis that holds secrets, ghosts and a grip of paranoia over the living (the character of Coppinger is a perfect example of someone who's been eaten up and spat out by the city). It also serves as a place of endless possibilities but, crucially, one that holds a power on the psyche of the population, ones who:

...preferred it when it began to get dark. By day the city seemed ancient and ambiguous. Its power was dissipated by exposure to daylight. It looked derelict and colonial. There was a sense of curfew, produce rotting in the market-place. At night it described itself by its lights, defining streets like a code of destinations. Victor would sit with the big wheel of the Zephyr pressed against his chest and think about John Dillinger’s face seen through a windscreen at night, looking pinched by rain and the deceit of women.

This style of narration has often been imitated, but never bettered. It's cinematic in it's lengthy scope, but academic in it's approach to the minor details. You could base a whole book just on that paragraph alone. And the novel is rich with such imagery.


In the same vein, the violence is dealt with in a manner which seems brisk, business like and with a hint of luridness:

Before he formed his own unit Victor sat in on several killings. In one they picked up a Catholic on the Springfield Road in a hijacked black taxi. He got a bit of a digging in the back and was moaning by the time they got him to a lock-up garage off the Shankill. They carried him inside. There was an acetylene torch in the corner of the garage. A battery leaked acid on to the floor. Victor wore a blue boiler suit and carried a short blade knife that he’d got in the Army and Navy stores. There was a smell of butane in the air, a sense of limits reached. The body was found in a shop doorway on Berlin Street. There were 124 careful knife wounds on the body. Death was due to slow strangulation. The victim appeared to have been suspended from a beam while he was being stabbed. The taxi was found abandoned on waste ground. There were traces of blood on the windows and a woman’s lipstick under the passenger seat.


No wonder it ended up being optioned for a movie.

Resurrection Man changed my life as a twelve year old. Although I probably only understood a third of it at the time, the neo-noir imagery and mood that ran through the whole book was a counterbalance to the positivity of the Good Friday Agreement (which was being promoted at the time I first read it). It taught me there was an awful lot I was not learning in school.

It made me appreciate the history and scope of my city, single handily taught me about neo-noir and showed me the nature of conflict. Everyone uses everyone in some shape or form, and it is fucking hell.