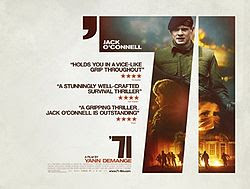 Not many “Troubles Films” stand out in one’s mind. At least, not for the right reasons. Ken Loach’s Hidden Agenda .. .Hunger..and perhaps Alan Clarke’s Contact.

In The Name of The Father, of course. But you would be hard pushed to find too many more. A Scots screenwriter and a first time French director — for a feature film at least — may not be the pairing to inspire great confidence in another. But you would be wrong. What they have given us is an exciting, taut and very intelligent thriller. A behind enemy lines movie that will leave you thinking long after the end credits have rolled. You could also throw the conspiracy label in there for good measure giving it another layer-a facet that gives the film an added attraction.

Gregory Burke’s dialogue is tight. He has encapsulated many of the Inner Belfast nuances — perhaps overdoes them in some parts. It must be remembered that Burke also wrote the Black Watch play from a few years back and it has to be said he has a great handle on the military nuances as well.

It’s easy to be picky about home based dramas and very often we fall into the trap of singling minor misdemeanours out — sometimes just for the sake of it. There are a couple of iffy moments in ’71-particularly early on, but certainly not enough to cloud your judgement of the rest of this brilliant film.

Jack O’Connor rightly receives the plaudits in the main role of a young soldier - Gary Hook, on his first tour of duty in Belfast, who gets left behind by his unit in the wake of a hair raising house search which goes tragically wrong. The supporting cast are a mix of local and UK based actors. Of these Richard Dormer stands out as Eamon, a former soldier himself who now lives with his daughter in Divis Flats. Sean Harris plays an undercover MRF Captain with particular menace and an all encompassing disdain for everyone around him:. friend and foe alike. Corey McKinley is a local teenager who makes an impact as a young Loyalist who attempts to help Hook in his short flight through the maze of West Belfast side streets and entries.

’71 was shot in Blackburn and Sheffield, recreating an almost perfect reconstruction of the working class ghettoes of the early seventies. The film is particularly strong on period detail and also succeeds in recreating a genuine claustrophobic feel especially in the Divis Flats sequences. Demange manages quite adeptly not to take sides Criticism if any on this front, may be that he gives everyone an aura of underhandedness—of low morals—of dubious motivations and of nonexistent ethics. Sums the situation up quite well then I hear you say.

There is a darkness about the film that recalls those long gone black days of the early seventies ... almost apocalyptic in its showing. The starkness of those little closed-in backstreets became a reminder of the narrow confines in which we all lived. Both literally and metaphorically. From a cinematic point of view no complaints can be levelled. Indeed this film ticks most boxes. It’s difficult to find any genuine downside.

On a personal level my one minor grievance would be that all of the well worn stereotypes and clichés from the “Troubles” are congested into a little more than ninety minutes but this would be a paltry criticism. ’71 is a must see film and well worthy of all the praise being heaped upon it.