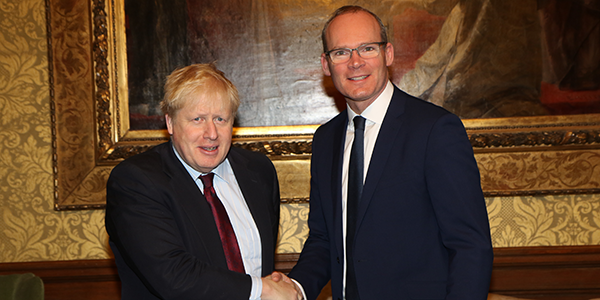 Why Boris Johnson Is Wrong About The Irish Border (Again)

By AM Thursday, September 27, 2018
Share Tweet Share Share Email
Former Foreign Secretary Boris Johnson has, once again, intervened in the Brexit debate about concerns over a hard border between Northern Ireland and the Republic of Ireland. Sean Swan writing in Democratic Audit explains how Johnson has misrepresented the problem, and why the border question is of such symbolic ­and physical importance.

Boris Johnson’s weekly column in The Telegraph seems destined to become, if it has not already, a weekly source of political controversy. First there was the burka and ‘letterboxes’, now we have an attack on Theresa May’s Brexit strategy in his article on Monday (3 September).

What is most worrying about Johnson’s latest article is its rather cavalier attitude to the question of the Irish border and the ‘myths’ (to use his term) surrounding it. He declares that ‘It is a myth – pure nonsense – to suggest that there is “no border” today’. Obviously, but this is a strawman as nobody is claiming that there is ‘no’ border. Everybody knows there is a border, but people are trying to forget about it. The point is that the border is invisible. The only way you can tell you have crossed it is by a slight change in road markings.

Much in and relating to Northern Ireland is a question of symbolism and appearance. For example, the question of how many days the Union Flag should fly over a city hall is not something likely to raise much interest, let alone controversy, in England, but in Northern Ireland this question led to months of violent protests.

Johnson continued, with his tale of mythology: ‘It is a myth to say that you could create an effective “hard border” – not with more crossing points than the whole of eastern Europe’. What people in Northern Ireland, particularly nationalists, mean by a ‘hard’ border is really anything that would make the border ‘visible’ again. It does not need to be anything as ‘hard’ as border checkpoints. This is the crux of the matter. It is not simply a case of avoiding a sort of Checkpoint Charlie on the main Newry to Dundalk road.

But focusing solely on the monetary value of trade occludes (to borrow an expression from Boris) other real problems – which are physical.

The type of goods traded north/south is also significant. While most of Northern Ireland’s east/west (Northern Ireland to Great Britain) trade is in manufactured goods, the two largest categories of goods traded north/south are food and drink, and agricultural products. These are goods in relation to which sanitary and phytosanitary regulations are particularly relevant. Too much of the debate on a cross-border trade post-Brexit has focused on tariffs and failed fully to consider non-tariff obstacles such as sanitary and phytosanitary regulations (this is one of the reasons simply staying in the Customs Union – or ‘a’ customs union – is a necessary but not sufficient condition for avoiding a ‘hard’ border).

Johnson stated that: ‘There are only about 50 large companies that trade across the frontier.’ Firstly, the very use of the term ‘frontier’ suggests that Boris is not fully aware of the symbolic power of language in relation to the border. (But then, he has previous on this.) Secondly, his point is true; but is not the whole truth. ‘Only’ 67 large companies trade north/south, but one-and-a-half times as many businesses in Northern Ireland, some 5000 in 2015, trade north/south as trade east/west. The vast bulk of these businesses are small and medium enterprises (SMEs).

SMEs trading north/south will be impacted more severely by new post-Brexit trade regulations than will the 67 large exporters, and will be least able to accommodate them. SMEs are least likely to have previously traded outside of these islands or, at most, outside the Single Market. They thus lack both expertise and facilities for dealing with customs regulations. The nature of much of what is traded north/south, food and agricultural products, is of a kind most likely to be affected by new customs regulations arising from post-Brexit divergence in sanitary and phytosanitary regulations.

Even in relation to east/west trade, a ‘hard’ border would cause disruption as ‘the sale of finished products to Great Britain [from Northern Ireland] relies upon cross-border trade in raw materials and components within integrated supply chains’. In short, the economies of Northern Ireland and the Republic are integrated into an all-Ireland economy to a far greater extent than, for example, the UK economy is integrated into the EU Single Market.

No doubt, given the reality of a minority government, the unionist and pro-Brexit DUP looms large in the minds of Boris Johnson and other Tories with regards to the border. But this should not occlude the fact that Northern Ireland voted Remain nor the fact that Sinn Féin – a party that refuses even to attend the Westminster parliament – is now the second largest party in Northern Ireland.

Boris concludes his article with a let-there-be-light flourish:

The answer is to go for the one solution that both delivers Brexit and treats all the UK in the same way: a big and generous Free Trade Deal, with intimate partnerships on foreign policy, justice, and all the rest – as adumbrated at Lancaster House. Of course that means fixing the Irish border problem. It is fixable. The scandal is not that we have failed, but that we have not even tried.


Except mere ‘free trade’ will not solve the border issue. Perhaps the real scandal is that light-on-detail guff like this is still being offered as a serious solution to a serious issue.

* This article represents the views of the author and not those of Democratic Audit.


➽Sean Swan is a Lecturer in Political Science at Gonzaga University, Washington State, in the USA. He is the author of Official Irish Republicanism, 1962 to 1972.