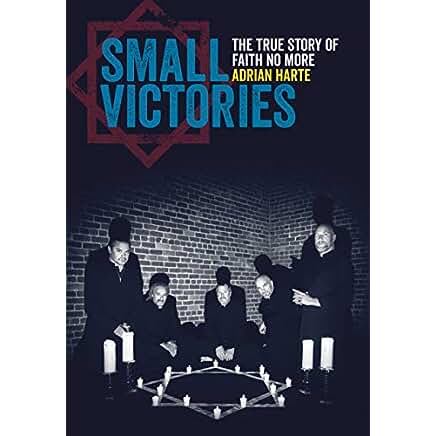 Small Victories - The True Story of Faith No More

No question, the 1980's were both unforgiving and generous to bands of a certain ilk.

Generous because there existed a genuine counter-culture where bands could thrive off doing their own thing, and unforgiving because, in the post Nirvana era, the ones who were attempting to cross over into mainstream success were left behind and seen as relics from a different era.

This culture shift hurt two bands in particular: Jane's Addiction and Faith No More. But while Jane's Addiction managed to court the grunge audience with Lollapalooza, Faith No More remained the oddballs from San Francisco who would give you alt-metal numbers like 'Jizzlobber' and then cover 'Easy' by the Commodores with a straight face.

They sold millions of records, and yet they are very much a cult act.

What Harte does brilliantly is convey just what misfits the band were in their own scenes. As well as mucking about with the tired rock n' roll formula by having various singers and guitarists (often regarded as the lynchpins of music by most), they also took influence from the more extreme end of post punk, through to metal, hardcore and classic rock. Because of this, the band forged a particular sound that couldn't be classified (even by alternative rock standards) and yet it was very popular. 'We Care a Lot' may have had a hand in influencing the Lovecraftian horrors of nu-metal, but listening to it in 2018, it still stands up as a genuinely heavy, danceable track dripping with sarcasm.

His depiction of the late Chuck Mosley is honest (in the sense that he seemed to have been an utter nightmare to deal with), but also with admiration (despite not being the best singer, his charisma was certainly a key part of the group in the early days). In fact, it's quite appropriate that Chuck's punk rock role is given proper exploration, while his million selling replacement (the legendary Mike Patton) is an aloof presence.

The glory period (1989's 'The Real Thing') understandably gets the most attention. And for good reason: aside from it being the group's biggest commercial success (helped by the genuinely bonkers 'Epic'), it also saw the group still being misfits in the mainstream. Harte depicts this period as a rollercoaster ride, and it certainly seems that way.

And there's the obligatory tale of going to the Sinn Fein centre when they played the Ulster Hall in 1990.

The only issue I have is that, at times, there isn't enough depth given to the various personality clashes within the group, and the later period (fascinating to me due to the group being perceived as irrelevant in certain circles) deserved to have a few extra pages.

Nonetheless, it's nice to see these misfits finally get their day in the sun with a full length biography written by a proper fan.