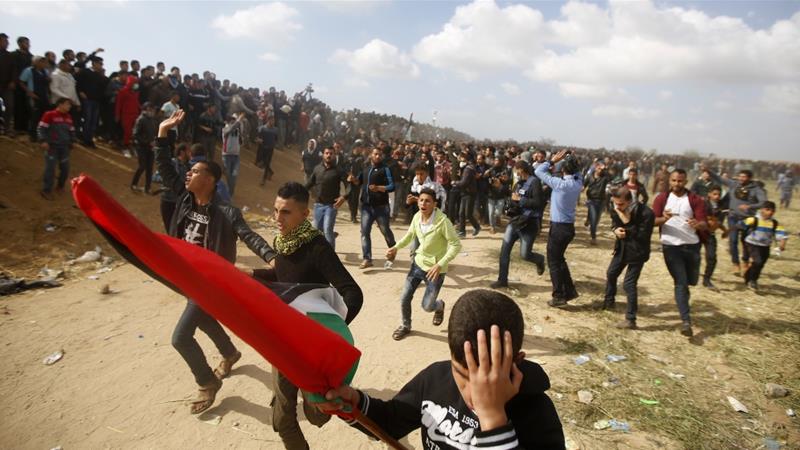 The Passover massacre in Gaza was by no means an exception in the long history of Palestinian resistance.


For decades Zionists have blamed the Palestinians for Israel's ongoing colonial project. "If only the Palestinians had a Mahatma Gandhi," many Israeli liberals have exclaimed, "then the occupation would end."

But if one truly wished to find Palestinian Mahatma Gandhis all one needed to do is look at the images of protesters on Friday night's news broadcasts. An estimated 30,000 Palestinians joined the nonviolent March of Return, which aimed to set up a few camps several hundred meters from the militarised fence surrounding the Gaza Strip. Their goal was to protest their incarceration in the world's largest open-air prison as well as the massive confiscation of their ancestral land - after all, 70 percent of Gaza's population are 1948 refugees whose families had owned land in what became Israel.

As Gaza's residents marched towards the militarised fence, I sat with my family, reciting the Haggadah for the Passover holiday, which tells us that "In every generation, it is one's duty to regard oneself as though he or she personally had gone out of Egypt". In other words, while the soldiers shot live bullets at the peaceful demonstrators, these soldiers' parents were being asked to imagine what it means to live in Gaza and what it would take to liberate oneself from such captivity. And as my family went on to sing, "No more shall they in bondage toil, let my people go," news sites reported that the number of Palestinians killed had reached 17, while several hundred had been wounded.

The accusation that Palestinians have failed to adopt non-violent methods of resistance, and therefore share responsibility for Israel's ongoing subjugation and dispossession, not only completely disavows the vast asymmetry in power relations between the coloniser and colonised, but, just as importantly, fails to consider the political history of anticolonial struggles, not least the Palestinian one itself. Indeed, it completely ignores the fact that Israel's colonial project has been upheld through attritional, protracted and widespread violence, and, despite what certain Western media outlets might present, the Palestinians have developed a robust and long-standing tradition of non-violent resistance. Moreover, the demand to adopt a non-violent ideology completely elides the history of other liberation struggles: from Algiers to Vietnam and all the way back to South Africa.
Palestinian non-violence

Friday's nonviolent March of Return and Israel's response to it are by no means an exception in the long history of Palestinian resistance. The march was organised to coincide with the anniversary of Land Day, which itself commemorates that tragic day in 1976 when Israeli security forces responded to a general strike and mass protest organised by Palestinian citizens of Israel whose land had been confiscated. In that peaceful protest, six Palestinians were killed and a hundred more wounded by the Israeli military.

In the West Bank and Gaza Strip, matters have always been much worse, since all forms of nonviolent Palestinian resistance were banned right after the 1967 War. Political meetings, raising flags or other national symbols, publishing or distributing articles or pictures with political connotations, or even singing or listening to nationalist songs - not to mention organising strikes and demonstrations - were illegal until 1993 (and some are still illegal in Area C). Any attempt to protest in one of these ways was inevitably met with violence.

One may wish it was otherwise - and I most certainly do - but not a single colonial project has ended without the colonised resorting to violence against their oppressors.

Just three months after the 1967 War, the Palestinians successfully launched a widespread school strike in the West Bank; teachers refused to show up for work, children took to the streets to protest the occupation, and many shopkeepers did not open their stores. In response to these acts of civil disobedience, Israel enforced severe police-style measures, ranging from nightly curfews and other restrictions of movement to cutting off telephone lines, detaining leaders, and increasing the harassment of the population. This, in many ways, became Israel's modus operandi when dealing with Palestinian continued nonviolent resistance.

Indeed, it seems that there is widespread social amnesia regarding Israel's reaction to Gandhi-style tactics. When Palestinians launched commercial strikes in the West Bank, the military government shut down dozens of shops "until further notice." When they tried to emulate Martin Luther King's transportation strike, the security forces completely immobilised the local fleet of buses. Moreover, during the first Intifada, the Palestinians adopted massive civil disobedience strategies, including merchant strikes, boycotting Israeli goods, a tax revolt, and daily protests against the occupying forces. Israel responded by imposing curfews, restricting freedom of movement and mass incarcerations (to name only some of the violent measures). Between 1987 and 1994, for example, the secret services interrogated more than 23,000 Palestinians, one out of every 100 people living in the West Bank and Gaza. We now know that many of them were tortured.

Thus, the tragedy is that Gaza's Passover massacre simply joins this long list of nonviolent resistance that has, historically, been met with violence and repression by Israel.
'Riots are the language of the unheard'

Let's imagine for a moment what it means to live in an open-air prison, year after year. Let's imagine that we are the prisoners and the warden has the power to decide what food we can eat, when we have electricity, when we can receive specialised medical treatment and whether we can have enough water to drink. Let's also imagine that any time we walk near the fence, we become targets for the guards. What acts of nonviolent resistance are actually open to us? Would you walk peacefully towards the fence? Thousands of Palestinians courageously did, and many paid the ultimate price.

Even though Gaza is, in many respects, unique, indigenous people have, historically, found themselves in similar situations. This was recognised by the United Nations, when it affirmed "the legitimacy of the peoples' struggle for liberation from colonial and foreign domination and alien subjugation by all available means, including armed struggle." Gandhi himself thought that in certain instances violence was an adequate strategic choice. "I do believe," he wrote:


that where there is only a choice between cowardice and violence I would advise violence ... Hence also do I advocate training in arms for those who believe in the method of violence. I would rather have India resort to arms in order to defend her honour than that she should in a cowardly manner become or remain a helpless witness to her own dishonour.


One may wish it was otherwise - and I most certainly do - but not a single colonial project has ended without the colonised resorting to violence against their oppressors. Requesting for or even angrily demanding liberation has never done the job.

Ironically, this is also one of the key messages of the Passover Seder. The story of Exodus recounts how Moses approached Pharaoh several times, asking him to liberate the children of Israel from bondage. Yet, again and again, Pharaoh refused. It was only after horrific violence was deployed against the Egyptians that the Israelites were set free.

This, to be sure, is not something we should ever wish for, but when one looks at Israel's response to the nonviolent Palestinian march, what is clear is that we must urgently find a way to turn the Zionists' question on its head in order to prevent future bloodshed. Rather than asking when the Palestinians will produce a Mahatma Gandhi, we need to ask when Israel will produce a leader that does not support the subjugation of the Palestinians through the employment of lethal violence? When, in other words, will Israel finally rid itself of its Pharaonic ethos and realise that Palestinians have a right to freedom.

The views expressed in this article are the author's own and do not necessarily reflect Al Jazeera's editorial stance.