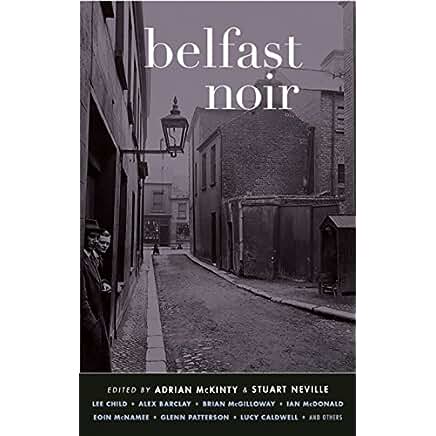 A good short story collection should be something that can be dipped into at leisure and enjoyed in isolation. The best ones, however, have a flow and rhyme to them that connect all the stories, no matter how disparate the writing style, and make the reader feel they're reading a proper novel.

There are examples of such a thing: The Informers by Bret Easton Ellis, War All the Time by Charles Bukowski, Dubliners, Metamorphosis and Other Stories. It's an art form in itself, and a highly underrated one.

So this collection, first published in 2014, has the capability of joining the illustrious ranks of the ones above, because each story is set in a different part of the city. Going from the historical battlefield of the Falls Road, through to the leafy suburbs of Dundonald and the grim, decaying streets of the Shore Road, there is a lot of scope here for the writers to explore.

On top of that, you have the term 'noir' and all the usual connotations. A lot of people just think it means 'dark', but it's so much more than that. The best noir conjures up an amoral world where supposed heroes are more corrupt than the supposed bad guys and cynicism runs through every page.

Few European cities have had as disturbed and violent a history as Belfast over the last half-century. For much of that time the Troubles (1968-1998) dominated life in Ireland's second largest city, and during the darkest days of the conflict - in the 1970s and 1980s - riots, bombings and indiscriminate shootings were tragically commonplace. Reflecting a city still divided, 'Belfast Noir' serves as a record of a city transitioning to normalcy, or perhaps as a warning that underneath the fragile peace darker forces still lurk.


Fertile ground for the creative mind, certainly. But does Belfast Noir stand up to this hyperbole?

Truthfully, it does and it doesn't.

When it does, it's less about the plots and more about the atmosphere on display. Take Lucy Caldwell's brilliantly twisted 'Poison', where a young woman has a chance sighting in a bar that triggers memories of past liaisons as a school girl. When you're reading it, you find yourself sucked into the listless suburbs that remained untouched by the violence, but always had a certain tension regardless.

The perfect example is the legendary Eoin McNamee's inclusion, 'Corpse Flowers', the most enjoyable and striking piece in this collection. Written in the form of a report, switching from CCTV camera to press conferences, it's an engrossing search for a murderer written in that distinctive McNamee style. A mix of the gritty, the esoteric and an awareness of how the past suffocates the present. It's intoxicating.

Take this for example:

You could see tramlines in the car park surface. The grid lines of long-gone streets. Men in belted coats standing at intersections, drab-suited kapos. Cold War phantoms. Letting you know you'd come under their remit. Their ghost authority.


Retreading hallowed ground does that to the mind, and McNamee's ability to tap into this section of our subconscious marks him out as a genuinely unique Irish writer.

Gerard Brennan's 'Ligature' is an ambitious attempt to tell a tale from the perspective of a teenage girl in Hydebank Young Offenders Centre. It doesn't work in places, due to the narrative being a bit too linear for this sort of person, but it manages to pull together for the chilling denouement.

Other stories do a decent job, but don't connect in the same way. Garbhan Downey's 'Die Like a Rat', if included in another anthology, could be considered an amusing and persuasive piece about the power that woman can exude over men. Here, it feels like an outtake from a Guy Ritchie movie.

Likewise, 'Rosie Grant's Fingers' (written by Claire McGowan). Maybe if expanded into a longer tale and included elsewhere, it could be seen as enjoyable pot boiler material. Here, it feels incongruous and the local references quite laboured.

The most puzzling inclusion (and certainly the weakest story) is Ruth Dudley Edwards' tale 'Taking it Serious.' On it's own merit, it's a well crafted story with an ending that somehow reminded me of the ending for Butch Cassidy and the Sundance Kid. However, despite it having virtually nothing to do with noir, what really irritates is her heavy handed metaphors (an autistic teenager involved in dissident republicanism and an "in the closet" former Provo who can't bring himself to admit his former organisation were defeated).

Of course, anyone who is aware of her writings will know of her political leanings, and it's certainly not uncommon for a writer crafting a story (be it a short one or a novel) to include some of these views in the plot. But metaphors of this ilk should be subtle, not bludgeoning.

In conclusion, it's a good collection that threatens to be great but falls short. Someone needs to take this format and write the ultimate short story collection about Belfast. We live in a fascinating time, always in a state of becoming but never actually being. Imagine someone taking that setting, throwing in the clipped prose of James M. Cain and the arcane worldview of Neil Gaiman.

That would be the greatest short story collection ever.