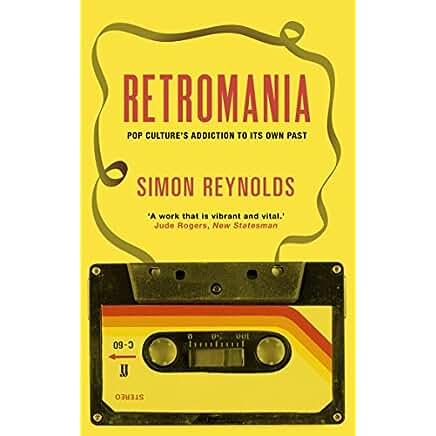 
Ever listen to the charts and think "I've heard this sound before?"


Ever look at the high street fashion and think "that was worn by kids 20 years ago?"


Ever watch a remake of a well remembered film from 30 years ago and think "what was the point in that?"


It's been a recurring theme in conversations over the years, and the conversations only seem to get louder as time goes on. So it's a perfect time to revisit this tome, first published in 2011.


Writing for Melody Maker from 1985 to 1996, Reynolds had a seat at a fascinating moment in music history: the various divisions in the underground were fading away and hybrids were being created (A.R Kane mixing free jazz and shoegaze, Public Enemy assimilating radical politics and cut up montages for music, The Young Gods integrating Kurt Weil and classic rock into their industrial sound) before the rave revolution took prominence.


Although I wouldn't agree with quite a few of his think pieces (he has a massive blind spot when it comes to metal, and he gets Killing Joke completely wrong in his landmark 2005 book Rip it Up and Start Again: Post Punk 1978-1984), I can't deny his influence in music journalism and I tend to find his tastes coincide with mine. So it's no surprise he took on the job of deconstructing this somewhat pernicious period in pop culture.


In the introduction, he writes that:

Once upon a time, pop's metabolism buzzed with dynamic energy, creating the surging-into-the-future feel of periods like the psychedelic sixties, the post-punk seventies, the hip-hop eighties and the rave nineties. The 2000s felt different... Instead of being the threshold to the future, the first ten years of the twenty-first century turned out to be the 'Re' Decade. The 2000s were dominated by the 're-' prefix: revivals, reissues, remakes, re-enactments. Endless retrospection: every year brought a fresh spate of anniversaries, with their attendant glut of biographies, memoirs, rockumentaries, biopics and commemorative issues of magazines. Then there were the band reformations...


As a result, it's not a big surprise that the biggest focus for the book is music. While this is unsurprising (given Reynolds' background as a music journalist), there is another reason for this:

... retro-consciousness nonetheless seems most chronically prevalent in music. That may well be because it somehow feels especially wrong there. Pop ought to be all about the present tense, surely? It is still considered the domain of the young, and young people aren't supposed to be nostalgic...

Tellingly, Reynolds reveals he's just as engulfed in this as much as the average person. While part of this is down to his job, he concedes that the allure of the past is just too much at times. This battle of dynamics becomes a prevalent theme throughout, but it also shows that the issues we're discussing haven't just appeared in the last ten years, they've been there since the mid 1960's.


Beginning by discussing the concept of nostalgia (coined in the 17th century by Johannes Hofer to describe homesickness that Swiss mercenaries would find themselves having on long tours of military duty) and its use by both conservatives and radicals to appeal to people sympathetic to their sentiments (the idea of a lost paradise for republicans, while unionists pine for the days where 'everyone knew their place').


However, by the 1970's, nostalgia had become intertwined with both pop culture and the consumer entertainment complex, so the programmes and toys we grew up with tap more into the collective psyche than memories of war or socio political events. In 1972, people asked "where were you when Kennedy was shot?" In 2018, people ask "did you have Adidas track bottoms with the buttons down the side?"


Remember, rock n roll is (give or take a year) sixty years old. So it's not a surprise that we now have museums, halls of fame, restraints and exhibitions dedicated to the genre. But since when did a genre that caused so much moral panic and commotion belong in a museum to be studied and dissected? Reynolds brings up a phrase conjured up by the much derided Jacques Derrida, 'archive fever', to categorise this. Nothing is insignificant and everything has to be documented and noted. And American network PBS are quoted in the book in such a way that chimes nicely with the above line:


Naturally, there had to be a fair bit of myth making and truth twisting in order for rock n roll to reach this "plateau."


In many ways, the ultimate (and perhaps extreme) example of this is Sha Na Na. Mastermind George Leonard was in despair at how the Vietnam War had divided students and wanted to remind them of something that united them: rock n roll. His mix of the anachronistic (the word 'greaser' was not in use in the 50's) and myth making (the students on campus would have looked upon 'greasers' as hoodlums and wouldn't have come from the same social background as them), combined with the music, struck a nerve with the Woodstock crowd.


As you can probably guess by what I've discussed so far, the book goes off in various tangents (such as discussing the similarities between Northern Soul dancers and Grateful Dead fans) but always manages to tie them back to the overall theme, and demonstrate that nostalgia and looking to the past for inspiration have always been a thing throughout the history of rock n roll.


What's also noticeable, but not surprising, is that the sounds and visions coming from the underground (where the innovation and forward thinking traditionally take place) are the ones who are openly borrowing/retooling the past for their own end:

most left-field genres - drone/noise, underground hip hop, extreme metal, improv, etc. - seem to have settled into a steady-state condition, evolving at an incremental rate that is unspectacular at best and often barely perceptible.

This sense of deflation is furthered when Reynolds brings up the case of noted sci-fi author William Gibson. Noting that all of his books since 2000 have been set in the present, Gibson feels that:


...where his generation had made a cult of 'the capital-F Future', the youth of today 'inhabit a sort of endless digital Now, a state of atemporality enabled by our increasingly efficient communal prosthetic memory'.


The end result of the book is to realise that, yes there is a rich lineage of history that we can endlessly gorge on, but at some point we need to create a new future for ourselves. Pop may well eat itself, but what do you do when the whole thing is consumed? While Reynolds tries to end on an optimistic note by saying that he believes the future is still out there, the reader can be forgiven for thinking otherwise.


It's a book that will cause arguments, one that will make you delve into those particular period described and make you reappraise them, and it's a book you can dip in and out of. In that sense, it's an enthralling read. But it still leaves you questioning.


With the recent demise of the NME, and the curation of grime (a twenty year old genre), it seems we're still haven't settled the argument: are we stuck in the past, or (to paraphrase William Burroughs) are we cutting up the past to find the future?