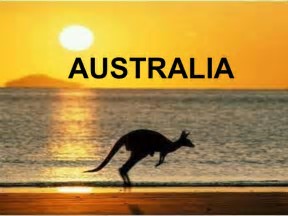 The Edge Of Empire

As a few of you on TPQ are aware I emigrated to the colony of Australia a while ago looking for work and a better life for my wife and two weans.

What I found was a most extraordinary place, full of diversity, awe-inspiring scenery and locals who display absolutely no notion of ‘Britishness’ despite having the Union Flag jammed in a corner of their own standard and allegedly Mrs Windsor as their ‘Queen’.

England is far removed from their lives, the empire is no more and save the odd (and rather boring) game of cricket not one Australian I have encountered really cares about this state of affairs. Many here would struggle to name the British PM and All really do think that ‘Poms’ whinge a lot, though I do think this is a tad unfair given the vast difference in weather and sensible way the Australians have organised themselves as a society who work to live rather than live to work.

Australia, for the most part, minds its own business and as long as the beer/wine is cold and they have sport they are a merry bunch. They are most definitely a nation obsessed with sport, however, and who can blame them? The weather here is great 85% of the year and a huge part of everyone’s lives is spent outside. From the stereotypical ‘barbie’ for dinner after work (with beer), to watching their kids play for their local soccer/rugby/AFL team (with more beer) and following all this with a few ‘cold ones’ with mates watching more sport on TV… mainly on the weekends though. (Rules firmly laid down by Mrs Steve!).

I have started to get my head a little around the politics here, and it seems to be set up based loosely on a mix of UK and US legislature with both an upper and lower house. The two main political parties of note are ‘Labor’, spelled inventively without the last vowel, and the other is a coalition of conservatives from the Liberals (in name only, notoriously homophobic/xenophobic) and the Nationals ( crazy redneck farmers).

Interestingly, the previous Liberal Prime Minister before he got shafted was a man by the name of Tony Abbott, a one-time trainee Priest who, aside from being a batshit crazy alcoholic, reinstated the archaic ‘Knighthood’ system of honours in Australia then proceeded to award the old racist ‘Prince Phillip’ a ‘Knight of the Order of Australia’… I would have loved to have seen the look on Mrs Windsor and Old Phil’s face when that news dropped! Castle Catholics have nothing on our PM’s!

There have been a few moves towards making Australia a Republic, however. Our current PM is a member of the Australian Republican Movement but by and large nobody really seems to care here. There apparently was a National vote in 1999 that was soundly defeated in every state. But I am led to believe that is because the people did not like the structure of the alternative, rather than some dearly held loyalty on the edge of empire.

Thus pervades a complete lack of interest in a Republic lately too. Ask an Australian what concerns them and they will invariably mention the price of electricity and gas firstly, and the absolutely insane prices for houses in the current market. Raise the notion of a Republic and expect raised eyebrows. The people want a roof over their heads and food in their stomach first and everything else is commentary.

The more things change, the more they stay the same!
Australia Steve Ricardos