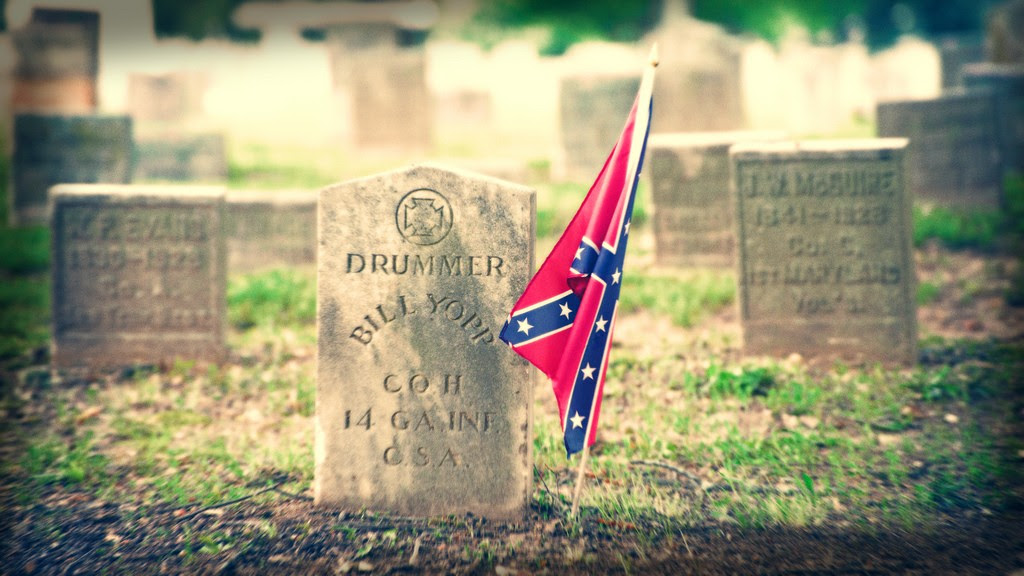 ﻿
I wrote the other day about the Confederate flag and the renewed controversy over that symbol in the wake of the mass killing by a white supremacist terrorist in Charleston, S.C. I want to revisit the topic briefly to try to make a few points more clear.

I accept the argument that the Confederate flag is a hate symbol, but I want to continue to argue that it is more than just that, and like any other symbol, context is key to our understanding of its meaning. So let me present two visual examples to try to make the point.

The picture at the top of the post is from the Confederate cemetery in Marietta, GA. In this context, marking the grave of a soldier killed in the war, I struggle to read the flag as a hate symbol. I see it here as a recognition of an individual’s sacrifice in a long, brutal struggle, even if we cannot today know the motivation for which he fought and ultimately died. We cannot know whether he was an eager volunteer or an unwilling conscript. All that we can know is that he was one more victim of a war which has defined the American experience in ways positive and negative.

In this context, the flag represents history and memory, not hate. It should continue to fly in such a setting. I see this as akin to and consistent with President Obama’s perfectly reasonable admonition that the Confederate flag belongs in a museum.

The second example, below, is by now a familiar one. It is the Confederate flag flying on the lawn of the South Carolina statehouse, and while all the other flags were lowered to half staff to honor those slain at Emmanuel AME church, by state law this one can never be.

In this context, the symbolism of the Confederate flag is painfully, obviously clear. It is a statement of defiance against racial equality and forced desegregation, and of longing for a past in which one group of humans could legally own another group of human beings. As this excellent article from the The Atlantic makes absolutely unmistakeable, in this context the Confederate flag is a symbol of proud, unabashed racial hatred, bigotry, and white supremacy.

The Confederate flag has no business flying over the offices of any level of government in any state, especially in South Carolina, and especially today. And so I join the voices of those who call for it to come down.

But let it remain where it today belongs. In cemeteries, at war memorials, historic battlefields, and yes, museums. It needs to continue to fly in such contexts to remind us of how far we have come as a people, and how far we still have to go.
Charleston massacre Peter Trumbore