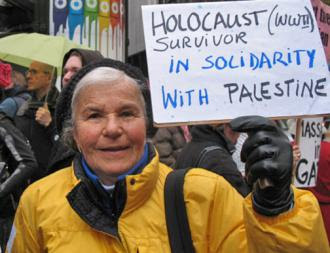 Never Again Means for Anyone

TPQ features a statement in support of the Palestinian victims of Israel's latest war on Gaza from survivors of The Holocaust. TPQ has reproduced it with permission from Socialist Worker.Org where it was carried along with the following introduction. It initially featured on the International Jewish Anti-Zionist Network site.

AS JEWISH survivors and descendants of survivors of the Nazi genocide, we unequivocally condemn the massacre of Palestinians in Gaza and the ongoing occupation and colonization of historic Palestine. We further condemn the United States for providing Israel with the funding to carry out the attack, and Western states more generally for using their diplomatic muscle to protect Israel from condemnation.

Genocide begins with the silence of the world.

We are alarmed by the extreme, racist dehumanization of Palestinians in Israeli society, which has reached a fever pitch. In Israel, politicians and pundits in The Times of Israel and The Jerusalem Post have called openly for genocide of Palestinians, and right-wing Israelis are adopting Neo-Nazi insignia.

Furthermore, we are disgusted and outraged by Elie Wiesel's abuse of our history in these pages to promote blatant falsehoods used to justify the unjustifiable: Israel's wholesale effort to destroy Gaza and the murder of nearly 2,000 Palestinians, including many hundreds of children. Nothing can justify bombing UN shelters, homes, hospitals and universities. Nothing can justify depriving people of electricity and water.

We must raise our collective voices and use our collective power to bring about an end to all forms of racism, including the ongoing genocide of Palestinian people. We call for an immediate end to the siege against and blockade of Gaza. We call for the full economic, cultural and academic boycott of Israel. "Never again" must mean NEVER AGAIN FOR ANYONE!

What you can do
If you are a survivor of the Nazi genocide or a descendent of survivors and would like to add your name to this statement, click here and scroll to the bottom of the document to fill in your name and information.

If you would like to help get this letter into the New York Times as an advertisement, click here to make a donation.