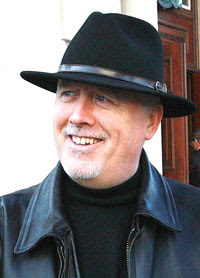 By AM Wednesday, May 28, 2014
Share Tweet Share Share Email
Alfie Gallagher with his thoughs on the inconsistencies in the Danny Morrison narrative of the 1981 hunger strike. It features on his blog Left From The West today, 28 May 2014.

Danny Morrison is not a happy man right now. Indeed, he took huge umbrage at Ed Moloney’s defence in the Irish Times of Boston College’s Belfast Project. In his subsequent letter to the newspaper, Morrison complains that Moloney “repeats allegations about myself, Gerry Adams and the 1981 hunger strikes made by former prisoner Richard O’Rawe”, whom Morrison accuses of “rewriting history”.

The real problem for Danny Morrison is not only that his own account of the 1981 Hunger Strike is full of holes – as Richard O’Rawe’s devastating rebuttal shows – but also that his account keeps changing. Morrison now denies that he brought in a British offer to the hunger strikers in the H-Block prison hospital when he visited Long Kesh on 5 July 1981. This was not always his stated position though.

In a debate with Richard O'Rawe on the BBC Radio Ulster show Talk Back on 28 February 2005, Danny Morrison claimed that the British had in fact made an offer through Brendan Duddy (a.k.a. the Mountain Climber), which he then brought into the prison on July 5. Morrison maintained that the subsequent stumbling block was the British refusal to have their offer "guaranteed" by an accredited British official who would enter the prison and formally make the offer in person.

Richard O'Rawe wrote about this debate in his book Afterlives:


Describing to the Talk Back audience how he had gone into the prison hospital on 5 July 1981, Morrison said that he “explained to them [the hunger strikers] what was on offer”, adding, “by the way, the offer that we were being offered through the Mountain Climber was a bigger and better offer than what the ICJP thought they had”. He went on: “After I had seen the hunger strikers, we all agreed that this [the Mountain Climber offer] could be a resolution, but we wanted it guaranteed.” 1


Now Danny Morrison could well argue that this entire broadcast is a figment of O’Rawe’s imagination. I'm sure the BBC has an archive of its radio programmes though, so O'Rawe's claim can easily be verified or refuted.

Incidentally, Morrison’s current position – well, at least at the time of writing anyway – is that because a final document had not been drafted for British cabinet ministers, no such offer existed on July 5. However, his argument was utterly debunked on the political blog Slugger O’Toole:

The British explained that it was "important before drafting any documents for consideration by Ministers" that the British should "possess the Provisionals' view". Their view, of course, could not be known until after Morrison returned from delivering the offer to the prisoners and was debriefed. McGuinness told Duddy their views would be relayed to the British "after discussion in light of Morrison’s visit".

It wasn’t until 1am on the 6th of July that the Provisionals’ view was relayed. No "final position" could be obtained from the British because the Adams committee had attached the condition that they see the draft proposal before it went public.


Again, all of this is likely to be dismissed by both Danny Morrison and Sinn Féin as “discredited” lies concocted by “enemies of the peace process”. For many years, that has been their default response to any criticism which comes their way. The irony of such attacks by Sinn Féin on its opponents is that the British government used the very same tactics when denying the systematic beating of republican detainees by the RUC 2 – “These people are republicans/bleeding-heart Amnesty lefties, so everything they say about us is a lie.” Plus ça change…

When the hot air dissipates and the ranting voices begin to fade, the issue here is quite simple. Given his inability to get either his fictions or his facts straight, does anyone anywhere really believe a word Danny Morrison says? On the other hand, given the consistency of his account and its corroboration by both Brendan Duddy and recently declassified documents, does anyone really doubt Richard O’Rawe now?